Public Notary Office (Chinese: 公证处 Pinyin:gōng zhèng chù ) is a subordinate agency of the Ministry of Justice of the People's Republic of China. It is responsible for certifying documents according to Chinese legal system. Examples of services offered are :

The functions of the Public Notary Office is classified into 4 functions.

Notarization is increasingly used by the ordinary people in civil and economic fields, such as the notarization of ante-marital properties and notarization before surgery. In fact, a full range of notary services are offered at the request of both domestic and foreign parties, covering every kind of civil activities and business transactions, from adoption, school application, marriage, inheritance, contract, real estate transactions to public bidding. In addition, many laws have already provided on notarization in their respective fields. In many situations, such as in the cases of the transfer of real estate, notarization has become a must. The development of the notary system has provided the basis for a law on notarization.

The National People's Congress (NPC), China's top legislation organ, has included the notarization law on its agenda. The new law is expected to define the profession's nature, functions, business scope and responsibilities of public notary offices, so as to provide a legal insurance for the work of notarization.

in Public Notary Office of People's Republic of China | Permalink

Role of a Japan notary

The duties of a notary include creation of notarial deeds, authentication of private documents and articles of incorporation, and the attachment of officially-attested dates.

A notarial deed is an official document prepared by a legal specialist called a notary in accordance with the law. As these are official documents, in addition to a high level of evidential power, if an obligor (debtor) defaults on a debt, it is possible for compulsory seizure to be executed immediately against the debtor's real estate, personal assets and claimable assets in Japan without any court judgement being rendered.

Notarial deeds include, without limitation:

If a foreign national resident in Japan has a will prepared at a notary office in accordance with Japanese law, the form of that will is valid in Japan. However, unless the laws of the person's nationality allow to apply the laws of Japan to the formation and validity of the will, or rules pertaining to inheritance, then they will be subject to the laws of the person's nationality. This in turn requires a thorough knowledge of that country's laws.

As the notarising authority of a notary is limited to private documents, official documents will never be the subject of authentication.
The content of documents to be authenticated must be lawful. Any documents containing matter that contravenes public policy or content that is illegal or invalid, or documents that might possibly be used in a crime cannot be authenticated.

When is private document authentication required?

What documents are required for authentication of private documents to be presented in a foreign country?

Below is the procedure followed when the signatory of a private document comes to a notary office seeking authentication. In addition to the document to be authenticated, please bring any one of the following four types of document.
(1) Passport
(2) Driver's Licence
(3) Basic Resident Register Card (to be attached with a full-frontal face photograph)
(4) Certificate of seal impression and the registered seal
(If an impression of your seal has been registered with the city hall or ward office, this is the document that certifies this fact. The 'registered seal' refers to the seal of which the seal impression was registered with the city hall or ward office.)

How do I obtain authentication of private documents, such as certificates issued by private universities or banks, for which it is difficult in practice to obtain power of attorney from the issuer for the purpose of authentication?

Leaving aside the issue of evidential power in a foreign country, if the person writes out the content of the bank or other certificate as a declaration, it is possible to authenticate that declaration.

(1) What is an affidavit or sworn statement?

This involves swearing in front of a notary that the content of the private document is true. Sanctions will be applied in case of perjury. In some instances a public office in a foreign country requires submission of private documents sworn by the party concerned as to the truthfulness of its contents and notarisation by a notary to that effect. In these cases, please use an affidavit.


(2) What are the fees for notarisation of affidavit?

The fee for notarisation of an affidavit written in a foreign language is 17,000 yen per document.

What should I do after I obtain authentication from a notary?

(1) When a private document is to be presented in a foreign country, sole authentication by a notary is insufficient.

In general, once authentication from a notary has been received, further authentication must be obtained from a Director of the Legal Affairs Bureau (District Legal Affairs Bureau) to which that notary is attached, that the authentication attached to the private document was made by that notary. The Ministry of Foreign Affairs then attests that the official seal of the Director of the Legal Affairs Bureau is true and finally the consulate of the country in Japan to which the documents will be presented makes its certification (called "consular authentication").
In instances where the overseas recipient of the private document is an organisation such as a private company, and where there is no objection by the other party such as when there is no requirement for submission to an official body in the recipient country, then sole authentication by a notary is sometimes acceptable.

(2) Formalities for obtaining "consular authentication" are complicated and the smooth passage of private documents can be obstructed. Japan is a member country of the Hague Convention under which authentication by a consular official is unnecessary. Therefore, if used among member countries of the convention, as long as the apostille of the Ministry of Foreign Affairs is obtained in the form prescribed by the convention, "consular authentication" is not required and the private document may be sent immediately to the overseas party.

(3) If the recipient is located in a foreign country which is a member country of the Hague Convention, the notary offices in Tokyo and Kanagawa Prefecture will produce authenticated documents with an apostille affixed so that once a notary authentication is obtained the document can be immediately submitted to the overseas party. Even if the document is sent to a foreign country which is not a member country of the Hague Convention, the above notary offices will prepare authentication documents attested by the Director of the Legal Affairs Bureau and the Ministry of Foreign Affairs, which means there is no need to go to either of these offices again, and after receipt of notary authentication, all that remains is "consular authentication" from a local embassy or consulate.

The notary offices in Toyo and Kanagawa Prefecture have simplified the procedure even more. For details please enquire at your nearest notary office.

(4) Please refer to the Ministry of Foreign Affairs Home Page for a list of member countries of the Hague Convention.

(5) Even if a country is not a member country of the Hague Convention, there are several countries that allow special simplified treatment. Please ask at your nearest notary office.

Authentication of articles of incorporation

Articles of incorporation are essentially the constitution of a corporation and are rules relating to its purpose, internal organisation and activities. This term can also be used to refer to written documents that record these or to an electronic record of the same.

When certain companies like a stock corporation (kabushiki kaisha) are set up, the validity of its articles of incorporation will not be recognised unless they are notarised by a notary. The work associated with this authentication shall be handled by a notary attached to the Legal Affairs Bureau or the District Legal Affairs Bureau that has territorial jurisdiction over the district in which the company's head office is located.

Articles of incorporation changed after the company is set up need not be notarised by a notary.

What are the fees for notarising articles of incorporation?

The fee for notarising articles of incorporation is 50,000 yen excluding the cost of a certified copy. Stamp duty incurs an additional cost of 40,000 yen.

How do I obtain an officially-attested date?

As an officially-attested date is simply the certification of a date, the person who created the document does not need to appear before the notary. Neither a power of attorney nor a certificate of seal impression is required.

The document which is the subject of the attachment of an officially-attested date, however, must be a private document duly prepared. In other words, it must contain the signature or the name-seal of the person who prepared it.

What are the fees for attesting official dates?

The fee for attaching an officially-attested date is 700 yen per document.

If you need to sign a legal document for use in outside of Hong Kong, it usually has to be notarised. The Notary's functions are: 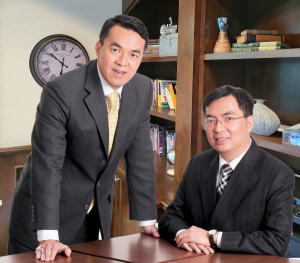